I have to have my bladder removed plus nymph gland and all other parts attached to bladder. I’m not looking forward to this at all but believe I have to have it done to get rid of this awful cancer.

Would love to hear from those who have had this done and how they coped with it all. Thank you.

In April 2021 dad went to his GP as he was urinating blood. An ultrasound determined the presence of bladder lesions and he was immediately referred to a urologist. A biopsy in June 2021 confirmed dad had bladder cancer that penetrated the muscle. A very aggressive small cell carcinoma. The urologist consulted an oncologist who stated that the best course of action would be to have a combination of chemotherapy and radiotherapy treatment. Bladder removal was out of the question.

Dad completed his treatments in November 2021 and a further scan revealed lesions on his liver. The cancer was spreading and dad was booked for more scans soon after. Dad could not go through with it as he started to have severe back pain and could not lie down for the scan and strong pain killers and muscle relaxants did not ease his pain.

On 21 March 2022 dad was admitted in to palliative care due to his rapid deterioration. He slept in a sitting position for several weeks. Dad was becoming confused and the oncologist suspected that the cancer had spread to his brain but due to the pain he refused scans. On 8 April 2022 dad finally had a lumbar CT (in complete agony), but he could not sit through further tests, revealing the cancer had spread to his spine that caused several fractures causing his pain. Dad became unresponsive from 9 April 2022 and sadly, he passed away on 17 April 2022. Dad was 78.

After several GP visits and Urologist visits for frequent and painful urination it wasn’t until almost six months later my husband was diagnosed with Stage IV bladder cancer on 27/5/21. It was a very rare and aggressive form known as Micropapillary Carcinoma Bladder Cancer. His treating Urologist hadn’t seen this type since 2006 and his treating Oncologist since 2014. My husband had never smoked which is apparently a leading cause for bladder cancer.

Less than a week after diagnosis he had ensured a seven hour surgery to remove his bladder, prostate and eight lymph nodes of which the cancer was in seven of them. There was a six week recovery report before chemo could commence.

Four cycles of chemo were required however after only one, my husband was admitted to ICU with lungs full of blood clots. Blood thinners then created other complications which resulted in 33 nights in hospital. It was decided chemo should not continue due to serious life threatening complications.

Mid September 2021 immunotherapy was commenced (Avelumab). These were administered every 14 days via his port. Mid November a PET scan was done and it was the first scan done since first diagnosed with cancer back in May (not sure why there was such a long gap).

On 25/11/21 we received devastating news that the cancer had spread to my husband’s bones, further spread of the disease in more lymph nodes and in the area where his bladder and prostate had been removed. We were advised we had 6-12 months based on how aggressive his type of bladder cancer was.

My beautiful husband lost his fight eleven weeks later and passed away on 10/2/22. He fought til the end to be with our family. He will forever be 56.

Hi – reading the forums – seems that in the US a lot of people have success with Uribel relieving post BCG discomfort. Seems it is not available in Australia – does anyone know if there is an equivalent available here?

Mum was diagnosed with Dementia in Oct 2019, things were getting a little confusing for her for some time prior. Sadly her awareness and vigilance to what was to come was challenged.

I noticed considerable swelling to her right leg and ankle, followed this up with her GP and later her doctor at Peter Mac Cancer Hospital. Over previous years mum survived vaginal cancer and lymphoma and therefore was a continued outpatient at Peter Mac. CT scan raised by her haematologist raised concern on her bladder, followed this up with urologist and high grade bladder cancer was diagnosed and sadly penetrated the muscle wall in September 2020.

Initial surgery to remove the tumor in late September was performed and at this time the urologist recommended a full bladder removal. Seeking a second opinion led to the follow-up of a pet scan, lymph node exploratory and later the removal of a lymph node to confirm if the cancer had spread. Thankfully it had not spread, however the outcome did confirm a full bladder removal was necessary.

Mum experienced extremely frequent urination throughout the day and in particular night as she lay in bed, burning and blood in the urine not relenting. In December mum was admitted to hospital, underwent 9 weeks of hospitalisation which included numerous procedures including nephrostomy bags and finally full bladder removal.

This exhausted her immensely and unfortunately her dementia baseline declined rapidly given several procedures each involving a general anaesthetic. Surgical, nursing and allied health team worked tiredly, however sadly mum lost her fight on February 13th 2021.

What we now know and learnt….
– Mum had intense radio therapy to the pelvic area 28 years prior, this was raised as the possible side effect which may have triggered the bladder cancer.
– Recommend automatic screening for those who have undergone radiotherapy to the pelvic area.
– Awareness and screening similar to bowel cancer for over 50’s and in particular for our aging community challenged with Dementia is most certainly needed to assist in early detection.

I was diagnosed in Dec 2018. Throughout 2019 I had BCG treatment which was unsuccessful getting recurrences high grade superficial. In 2020 I had 6 rounds of gemcitabine had more recurrence. I decided to have RC in October now going well with a stoma getting results next week.

Hi I have been diagnosed with bladder cancer, and have started BCG treatment – so far it seems to be going quite well. Reading the (mostly USA based) forums to try to improve my knowledge of the disease – it seems to me that in the US the urologists often team up with oncologists in determining your treatment options – but (from my admittedly very limited understanding) not so much in Australia – where the urologists tend to handle it all. I’m quite keen on getting a second opinion on my treatment – no issue with my current urologist but there is a lot at stake for me (!) – does anyone have a recommendation for a Melbourne based uro-oncologist, or perhaps a urologist specializing in bladder cancer? With thanks to anyone able to help!

I was diagnosed in February 2020 with Urothelial Carcinoma in my left kidney. I was 55 years old, female, very fit, never smoked and rarely drank.

My husband and I were booked to go on a cruise the coming Saturday, but my oncologist said chemotherapy had to start straight away.

Late 2019 i had consistent lower back and side pain, I left it for a few weeks, as I was lifting weights at the gym, and just thought it was a pulled muscle.

I decided that I needed to get it checked, went to my GP, who ordered a CT scan with contrast.

END_OF_DOCUMENT_TOKEN_TO_BE_REPLACED

Hi everyone, my father has recently been diagnosed with large cell neuroendocrine carcinoma in the wall of his bladder. He is due to have a radical cyctectomy which will include taking the prostate and neighbouring lymph nodes next Tuesday. His treatment options afterwards are very slim as he has acute renal failure which he was born with and has dialysis three times a week. Would like to know if there are any treatment options for patients with kidney disease and LCNEC in the bladder?

My sister passed away last year after a short battle with bladder cancer.   What I noticed when researching the disease, is that the most prominent symptom in the early stages is haematuria. Maybe my sister was a rarity, but she never had haematuria but she presented to her GP with high urination frequency.

END_OF_DOCUMENT_TOKEN_TO_BE_REPLACED

I was diagnosed on the 22nd May 2018, I was 50 years of age. First and only symptom was haematuria. I went to my GP the day after this symptom, had a ultra sound 5 days after and I was diagnosed with high grade non muscle invasive cancer. My first surgery approx 4 weeks after. I didn’t fit in any of the risk groups. After numerous TURBT’s and one dose of Mitomycin I was cancer free for around 6 months then it returned, after two more TURBT’s, I’m now starting my first BCG treatment on Friday. END_OF_DOCUMENT_TOKEN_TO_BE_REPLACED 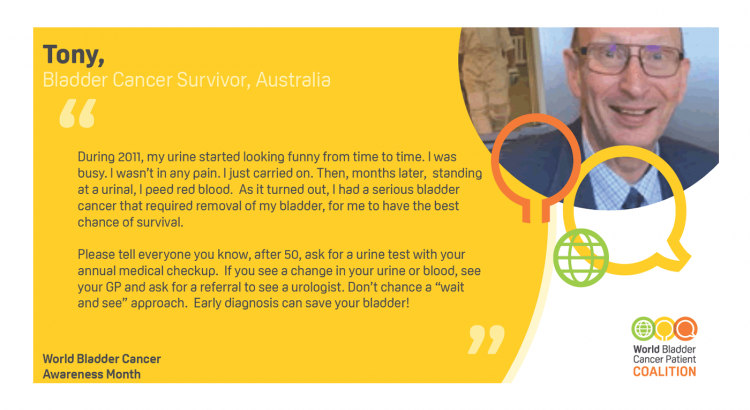 From Tony: “Early diagnosis can save your bladder!”

Tell your story by posting here or on social media using the hashtag: #BladderCancerAwareness

We would really appreciate it if you followed us on Social Media to help spread the word about the importance of Bladder Cancer testing.

These guides have been developed by doctors and patients to give those going in for surgery or investigation a clear picture of the entire procedure.

Help us continue with our advocacy and care assistance by making a small donation: